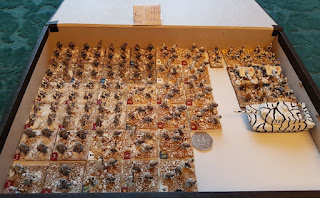 The FUBAR Wargames blog is dedicated to publishing free, simple, brief and clear rules for wargames.

Many of the sets featured here are the products of a collaboration between Craig Cartmell and a group of stalwart and imaginative wargamers who are called collectively The Forge of War Development Group.

The group’s golden rule is credit where credit is due. Thus each person who contributes to a game is credited for that contribution in the ruleset.

Craig has been designing and publishing free sets of rules for over twenty years, and gaming for a lot longer than that. Recently he hit pay dirt co-authoring the In Her Majesty’s Name series of wargames rules for Osprey with his old friend Charles Murton. This led him to not working on FUBAR and other projects, something that will now change with the creation of this blog.

Craig Cartmell, is a little strange and likes to talk about himself in the third person.

Email ThisBlogThis!Share to TwitterShare to FacebookShare to Pinterest
Labels: Announcements, FUBAR, Like Minds, War Games From The Net