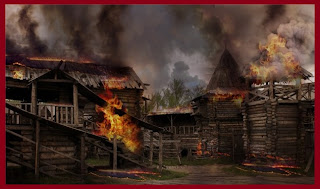 A cavalry patrol lead by Roger the youngest son of Baron Frederick came upon a horrendous
sight as they rode to the southern most part of his fiefdom. As his lance entered the north end
of the valley the village of Hasburgh located on the southern end was ablaze.

The 40 riders galloped their horses to the gate of the stockade that was torn down, Roger ordered
scouts to follow any tracks out of the village, he then ordered the rest of the men to search the
village.

After four hours of searching not one person living or dead was found, the scouts returned and
informed their lord that the tracks of a large body of men and horses disappeared at the edge of
the river to the south. The scouts estimated that the tracks were at least five hours old.

Roger sent word of this attack to his father but, he wondered how any enemy could take such
a well fortified village and where are the people? As is the imperial practise boarder villages
are surrounded with a stockade and have a watch tower manned at all times, furthermore the
village headman was a retired man at arms as were many of the other village men. It is the
custom within the empire to settle old soldiers on the boarder lands and to recruit their sons as
they come of age. These facts weighed heavily on Roger when thought that there were at the
very least 60 well trained men in this village and over 250 souls in total. The strangest thing
of all was that nothing of value was taken, helms, armor, swords left where they fell, shops
burned with goods left inside. The only thing taken were the livestock and people.......
Posted by Don M at 12:33 AM

Email ThisBlogThis!Share to TwitterShare to FacebookShare to Pinterest
Labels: Campaign