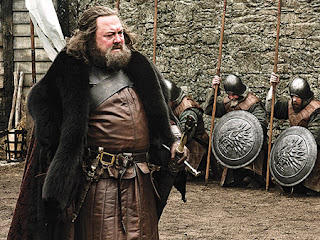 Just after dawn an exhausted rider rode through the great gate house of Baron Fredrick's castle,
challenged by the sergeant of the watch as he came to halt inside the bailey, "what news of the south?"
the asked. The courier wiped sweat and dust from his face and replied," Sergeant, I bare sad tidings from young Lord Roger,  the village of Hasburgh is lost!" The sergeant commanded the courier to
wait where he was and then sent a runner to wake the lords Reeve.

Egbert Baron Fredrick's Reeve was startled awake by loud knocking at his chamber door, throwing
on his robe he called out to see what was the matter. He was briefly told of the courier that awaited
him in the castle bailey. Hurriedly he called his servants to dress him and wake the rest of the castle.
Rushing to the bailey he saw the tired figure standing beside the watch sergeant holding the sealed
message tube in his hand. He asked the courier to describe to him all that he had seen then said,
"the Baron will want to hear this from you, follow me."

Egbert led the courier into the main hall where the Baron was already seated. Baron Fredrick
always a large powerful man had gone fat in his later years but he had lost none of his wit or
intelligence. His dark eyes looked out under heavy brows as he stroked his full dark beard.
The Baron's full voice boomed, "what news Egbert?"

Grave news my lord,  the village of Hasburgh has been destroyed and all the people are missing.
As Egbert told his lord this the courier knelt before his lord and held the dispatch out to the Baron.
Fredrick broke the seal and removed the parchment, and began to read his son's hurried but steady hand. The lord's face was drawn as he took in the grim report, at last he looked up at the courier
and said, "Your Tully's son James aren't you? "I my lord" the the courier replied surprised that
the baron would remember the son of a lowly archer. Fredrick had his man give all the details he
could recall then dismissed him to eat and rest.

The Baron sat deep in thought for several minutes then arose and began to give orders to his retainers,
sending riders to summon his banner men here. He dictated a detailed letter to the Lord Marshal and
to the lords to his north,east and west. The castle was now a rush in activity, riders came and went on the hour. The Baron was to gather his forces with in the week and march south........
Posted by Don M at 9:11 PM